Marital discord
Can't last if you love your spouse
Because love forgets.

"True Love Tends to Forget" is part of Dylan's ultimate "to hell with love" album, "Street-Legal," reportedly so named because he was back in business again as a single man after his separation from his wife. I try to avoid the personal references in Dylan's songs, since they ought to appeal to a wide crowd being that it was published for everyone, but this one must be about the confusion of an ended relationship that keeps sort of almost starting again. It's the moment in the breakup at which one of the parties says "whatever" to the most callous insults and transgressions because they seem preferable to losing someone entirely. Hence the recitation of various grievances, along with the assurance that he can deal with all this. Specifically:

You belong to me, baby, without any doubt

Don’t forsake me, baby, don’t sell me out

- When his baby's near, it's hard to recognize her. No more room to regret. "True love tends to forget."
- He wants her to hold him. He reminds her that she said she would be sincere, but every day feels like a game of Russian roulette.
- The great instrumental break and verse comes here in this verse, which he sings twice:
"I was lyin’ down in the reeds without any oxygen
I saw you in the wilderness among the men
Saw you drift into infinity and come back again
All you got to do is wait and I’ll tell you when"
- He's under her spell, but this "weekend in hell is making me sweat."
- She should stay, she shouldn't leave him. Don't let him just wander around from Mexico to Tibet. Regarding that last line, evidence in Dylan's more recent work, starting with "Time Out of Mind" in 1997, indicates that he's been doing just that, at least in his songs. 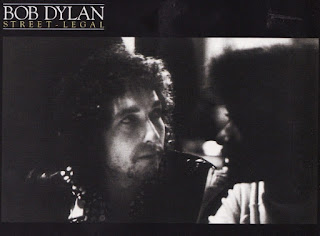 Posted by Robert MacMillan at 7:17 AM