Woman marries judge
To spare dad from death. Judge lies
So she curses him.

Talk about a lack of faith in the judicial system. Here's a creepy tale of the daughter of Old Reilly. He stole a stallion and got caught. They put him in chains and locked him in jail. The sentence for stealing the horse? Hanging. Old Reilly's daughter hears about this and asks the judge for mercy. She's willing to pay him off, and she's been riding all night with gold and silver. The old man judge takes one look at Reilly's daughter, and has a different idea: he'll intercede if she fucks him. Reilly doesn't like the idea, saying he'd rather be dead than know the judge has been all over his daughter. She says death is certain if she doesn't do it, so she needs to take the chance. She goes to bed with the judge, and discovers that he lied. They still hanged her father despite her sacrifice. She wishes curses on the judge:
1. No doctor can save him.
2. Two healers can't heal him.
3. Three eyes won't see him.
4. Four ears won't hear him.
5. Five walls won't hide him.
6. Six diggers won't bury him.
7. Seven deaths won't kill him.

The song was recorded in 1963, but did not get an official release until the first volume of the Bootleg Series came out in 1991. 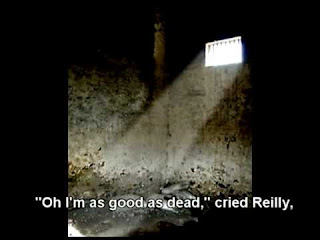 Posted by Robert MacMillan at 11:40 AM