Love affair hinges
On unexpected plot twists,
And it has to end.

A short story about a love affair, "Simple Twist of Fate" is widely seen as a tragic tale of Bob n' Sara, given its appearance on the 1975 album "Blood on the Tracks." Much of that album was, they say, at least inspired by the breakup of their marriage.

Events:
1. They met in the park, and it was clear that they were going to get together. He has a twinge of doubt and wishes that such a simple twist of fate had not brought them together. Premonition of tragedy.
2. They checked in to a motel on a hot night.
3. She gives him the slip while he's sleeping. She gives a coin to a blind man on the way out the door, which I'm assuming is a reflection of what she just did for the singer, who apparently also is blind. A charity case, if you will.
4. He tries to be cool and say that it didn't matter, but it's clear that he has fallen in love.
5. He looks for her daily by the waterfront.
6. He thinks that they were cosmically destined for one another. That's what a simple twist of fate will do. 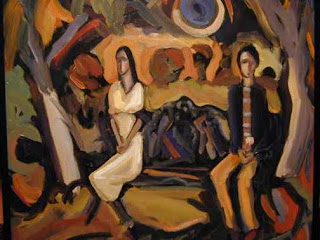 Posted by Robert MacMillan at 2:44 PM

Labels: 1975, Blood on the Tracks, Simple Twist of Fate