Sittin' on a Barbed-Wire Fence

Bob's temperature's up,
His dog bites a rabbit, his
Woman calls him Stan.


More wordplay on a half-finished song. That's the essence of "Sitting on a Barbed Wire Fence." It was recorded in 1965, but didn't appear on a commercially released album until 1991 (The Bootleg Series, Vol. 1-3).

I paid fifteen million dollars, twelve hundred and seventy-two cents
I paid one thousand two hundred twenty-seven dollars and fifty-five cents
See my hound dog bite a rabbit
And my football’s sittin’ on a barbed-wire fence 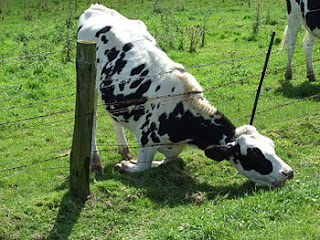 Posted by Robert MacMillan at 2:53 PM