This 1979 song from the album "Slow Train Coming" is Bob Dylan's first "cranky old man" song, and just think about it; he was only 38 years old! "Slow Train" begins with Dylan's exclamation that he feels low-down and disgusted and he can't help but wonder what has happened to his friends. Are they lost or found? Soon they will have to understand that they'll have to leave behind everything that they hold dear because judgment day is on the way... or the apocalypse or some kind of reckoning, symbolized by a slow train that's just around the bend. The rest of the song is a series of short stories, most of which sound like querulous complaints as well:

1. I knew a woman from Alabama who set me straight about God and accepting Christ as my savior: "Boy, without a doubt, you have to quit your mess and straighten out. You could die down here, be just another accident statistic."
2. Foreign oil controlling American soil. Sheikhs with jewels and nose rings decide America's future from Amsterdam and Paris. One of Dylan's most unintentionally funny lyrics.
3. Man's ego and laws must go. In the USA, Thomas Jefferson is turning in his grave to see fools trying to manipulate Satan as they enrich themselves.
4. Negotiators, quacks and woman haters, masters of bluffing and propositions: they're all bad but the real enemy tries to act nice. There are people who are thieves, stealing in the name of religion. False prophets, televangelists, etc.
5. People around the world are starving, but there's a grain surplus (true story from those times), and it actually costs more to store food than to give it. Meanwhile, we're expected to lose our inhibitions and maximize our ambitions. This isn't what brotherly love is all about. People talk about it, but they don't know what they're saying.
6. My sweetheart left me for some jerky, but easily controlled guy. They went to Illinois. Meanwhile, I see that my loved ones are being turned into puppets. That's far more important to me than economy or astronomy. 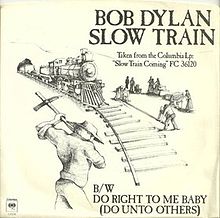 Posted by Robert MacMillan at 2:56 PM