Spanish Is the Loving Tongue

This is an old cowboy song, or maybe just a western border song, based on a poem from 1907 by Charles Badger Clark. It's about a man who falls in love with a Spanish girl down in Sonora. The trouble with him is that he's not a terribly upstanding guy. He gets into a gambling fight and must flee for his liberty. She begs her not to go, but he goes anyway. He says he misses her, but in such a nonchalant "yeah I sort of think about her" way that he sounds like a cad. But I suspect that he was lying to himself. The poem and the song lyrics are below. Dylan recorded a version with a studio band in 1969 that wasn't intended to show up anywhere, but show up it did when Columbia released it and other songs of Dylan's on a 1973 album after he bolted for Asylum Records. Most people hate it, though I like it. There is an undeniably beautiful version of him performing it on solo piano. That version was released in 1971 as the flip side to the "Watching the River Flow" single.

Spanish is the loving tongue
Soft as music, light as spray
'Twas a girl I learned it from
Living down Sonora   way
I don't look much like a lover
Still I hear her loved words over
Mostly when I'm all a-lone!
Mi amor, Mi corazón
nights that I would ride
She would listen for my spurs,
Throw that big door open wide,
those hours would go a-flyin!
All too soon I would hear her sighin'
In her sweet and quiet tone
"Mi amor, mi corazon."
Haven't seen, haven't seen her since that night,
I can't cross, I can't cross the line, you know.
They want me for a gambling fight
Like as not it's better so.
Still I've always  kind of missed her
Since that last sad night I kissed her
I broke her heart, left my own
"Adios, mi corazon." 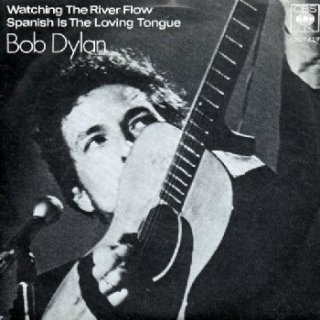 Posted by Robert MacMillan at 6:13 PM