Take a Message to Mary

"Take a Message to Mary" is an Everly Brothers song, written by the songwriting team of Felice and Boudleaux Bryant. Bob Dylan covered it in the 1970 album "Self Portrait." He and producer Bob Johnston give the song a sappy arrangement typical of the times with saccharine female backup vocals and various other accoutrements that you would expect from a TV variety show special of the time. In short: frontier boy turns bad, robs a stagecoach, presumably shoots someone by accident, goes to jail for life, and asks someone to please not tell his girlfriend Mary what he did because he's ashamed of himself. He would rather she believe that he abandoned her, which to me seems at least as bad as saying you turned into a criminal. At least a prison sentence would convey the idea that he's still in love with her, but a victim of his own stupidity, whereas leaving her because he had wandering feet makes him sound like an asshole. But you know what? This has never happened to me, so I can't speak for this young man. 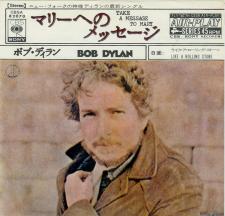 Posted by Robert MacMillan at 11:18 PM

Labels: 1970, Self Portrait, Take a Message to Mary