Angels play their horns
While commuters ignore them
And a driver sighs.

This song reminds me of being wrapped in the fog of narcotics as a busy day goes by on the street and nobody knows that you're high. "Three Angels," released in 1970 on the album "New Morning," uses a funereal organ backed by the sustained notes of Dylan's backup singers. He intones a story over these church-like sounds of three angels blowing their horns and dressed in green robes and protuberant wings, hovering over the city while no one in the busy streets below notices them because each is wrapped in his or her own fog.

- The angels have been there since Christmas morning.
- A wildcat from Montana flashes by.
- Then a lady in a bright orange dress.
- A U-Haul trailer, a wheeless truck and the Tenth Avenue bus going west.
- Dogs, pigeons, a man in a badge, three guys on their way back to work.
- Nobody asks why the angels are there.
- The angels are standing on poles and a bakery truck parks near them. The driver's looking for one recognizable face.
- The angels keep playing all day long and they watch the earth and the people on it pass them by.
- Nobody even tries to hear the music that they play. 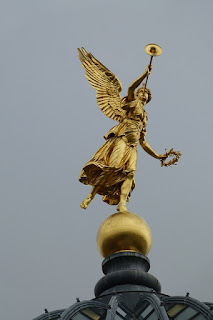 Posted by Robert MacMillan at 1:23 PM