Better grease that pig
Because the king of the drunks
Is coming to party.

The nickname “Tiny” usually is applied to someone who is large, so I’m assuming that the “Tiny Montgomery” of this 1967 Basement Tapes song is a big drunkard who’s coming to town and one of his friends is announcing to a bunch of people in San Francisco (or maybe Frisco, Texas) that Tiny’s coming to town to shake things up and have a good time. The lyrics on this song, like many of the Basement Tapes songs, veer toward silliness and comedy. The names, especially, evoke images of old-time bars and bruisers and knuckleheads:

Tiny’s coming to Frisco.
He’s gonna “shake that thing” when he gets there, which will give every boy and girl a bang.
Skinny Moo and Half-Track Frank are about to get out of the joint.
There’s a buzzard and crow in here too. Tell them Tiny says hello.
“Scratch your dad, do that bird, suck that pig and bring it on home. Pick that drip and bake that dough. Tell ‘em all that Tiny says hello.”
He squeezes too. “Watch out, Lester, take it, Lou.”
Tell the monks and the CIO that Tiny says hello.
Now grease that pig, and sing praise. Go on out and gas that dog. Trick on in, honk that stink, take it on down and watch it grow…”
Tell the three-legged man and the hot-lipped hoe that Tiny says hello 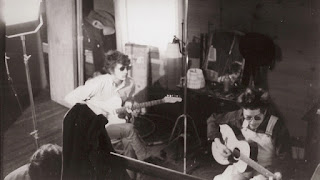 Posted by Robert MacMillan at 2:45 PM