Standing on the Highway

Bob's standing around.
Trying to thumb himself a ride.
His life rolls on by.
Here's another lonely hitchhiker thumb-a-ride song that Bob Dylan recorded as a demo for the Witmark publishing company in 1962. It’s the old, well known lament of blues singer Robert Johnson: Standing on the highway, trying to bum a ride, but nobody knows him, and everyone passes him by. The second verse is more metaphorical: he’s trying to be brave, as he notes that one road goes to “bright lights” and the other goes to the grave.It goes on like that. 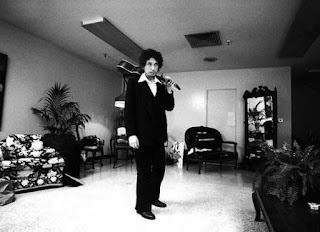 Posted by Robert MacMillan at 4:30 PM