"May I ride you home?"
Wallflower asks wallflower
For a late-night dance.

"Wallflower" didn't make an appearance on a Bob Dylan album until 1991 when it was included in the rare/unreleased recordings in the first volume of the Bootleg Series. The song had been around for a while though, mainly because of its appearance on the 1973 album "Doug Sahm and Band" on which Dylan performed as a sideman. The song, which Dylan copyrighted in 1971, is a standard country and western love song.

1. Wallflower, let's dance. I'm sad and lonely like you. As a matter fact, I'm falling in love with you.
2. What are we both doing here? Let's dance.
3. I took one look at you and, regardless of the smoke in this joint, I knew that you would be the one for me.
4. The ending that most of us hope for in such circumstances: "Wallflower, wallflower, take a chance on me. Please let me ride you home." 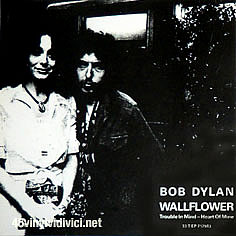 Posted by Robert MacMillan at 9:21 AM