Man learns a lesson:
They *do* shoot the messenger.
He gets a new job.

"Wicked Messenger," from the 1967 album "John Wesley Harding," is one of the greatest songs that Bob Dylan produced, all the more so for being so short and direct. The trouble I had with it was that I had no idea what it was about. Not anymore. I've read some interpretations, and the one I like best is that the messenger is Bob, who discovers through his abrasiveness that there is more to delivering messages than making them harsh, blunt and mean, and in fact, these bitter truths are a way of concealing the message by making people close their ears instead of opening them.

Words that opened up my heart:

There was a wicked messenger
-- Bob Dylan, protest singer, scourge of the bourgeoisie and the squares and &c. Via Proverbs 13:17: "A wicked messenger falleth into mischief: but a faithful ambassador is health."

From Eli he did come
-- High Priest of Shiloh. Sent a message to Hannah that she would get pregnant by her husband, despite previous infertility and subsequent mocking by her husband's other wife. Trains Samuel on how to be a religious judge. His own sons are wicked: they take prime cuts of meat from sacrifices and fuck the women who serve at the sanctuary. God tells Samuel to tell Eli that his sons will die on the same day. Samuel tries to hold back specifics of the bad news, but Eli insists on getting the whole story.

With a mind that multiplied the smallest matter
-- "Positively 4th Street," anyone?

When questioned who had sent for him
He answered with his thumb
For his tongue it could not speak, but only flatter
-- His very body disobeys him because it disavows his bitter truths.

Oftentimes he could be seen returning
Until one day he just appeared
With a note in his hand which read
“The soles of my feet, I swear they’re burning”
-- From the Book of Malachi: And ye shall tread down the wicked; for they shall be ashes under the soles of your feet in the day that I shall do this, saith the LORD of hosts. Either the messenger or someone else is getting that old-time feeling of exalted ecstasy.
-- And, especially given the next verse of the Dylan song, consider this line from the Book of Habbakuk, in which God get pissed off, having a proper "don't make me come down there" moment:
God came from Teman, and the Holy One from mount Paran. Selah. His glory covered the heavens, and the earth was full of his praise. And his brightness was as the light; he had horns coming out of his hand: and there was the hiding of his power. Before him went the pestilence, and burning coals went forth at his feet.

Oh, the leaves began to fallin’
And the seas began to part
And the people that confronted him were many
And he was told but these few words
Which opened up his heart
“If ye cannot bring good news, then don’t bring any”
-- Enlightenment is hard. Or to quote Carl Jung: "There is no coming to consciousness without pain. People will do anything, no matter how absurd, in order to avoid facing their own Soul. One does not become enlightened by imagining figures of light, but by making the darkness conscious.”

By the way, the song rocks, especially the bass. 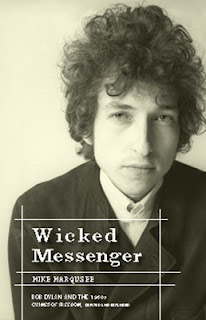 Posted by Robert MacMillan at 12:53 PM