Went to See the Gypsy

This song from 1970 remains ambiguous to observers because they think that this a story of Bob Dylan meeting Elvis or Jimi Hendrix or someone. Maybe it’s just a gypsy. It is an atmospheric tale, moving through the night as he tells it with suitable music to match, and then bursting into dawn with a sudden freedom of daylight reflecting in the band’s approach. And just as soon as this song starts, it’s over. That’s a pity as it’s one of the most beautiful songs in his catalogue, and certainly one of the best on “New Morning.” To me, it feels like a song about the discovery of what’s possible and what you can do out there in the world, especially as a young person. Or in other moods, it reminds me of what an adult would feel who has never gone anywhere, upon meeting people who have wandered everywhere and given him a taste of what could be. When he makes up his mind to join the gypsy and his pretty dancing girl, he finds them gone, so what else to do but watch the sun rise and prepare for another day at a dull job in a dull town in a dull life? Or  third angle: the gypsy is indeed Elvis. Bob hears the music that will define his life for the first time, thanks to whatever serendipity brought him to a party. He knows his life will change now as he turns away from the “river of tears” and watches the sun rise.

Goes to the gypsy’s party at a big hotel. He says hello from the dark, crowded room where the party’s happening.
Bob goes to the lobby to make a call. A pretty dancing girl promises him that the gypsy can “drive you from your fear, bring you through the mirror. He did it in Las Vegas and he can do it here.”
Lights shine on the river of tears. He hears the music.
He return to the gypsy just before dawn -- ready to commit in some way, I think, and leave the past behind. But the gypsy and the dancing girl are gone. So he watches the sun rise in his “little Minnesota town.” 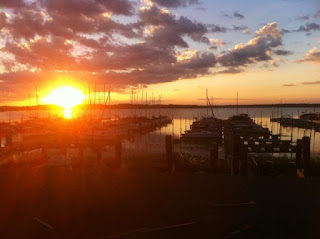 Posted by Robert MacMillan at 3:20 PM