When the Night Comes Falling From the Sky

You'll need him at dusk.
Until then, you'll be mostly
Wasting all your time.

Among Dylan fans and people who know the 1985 album "Empire Burlesque," this song has been subject to some mockery for its dance club style thanks to producer Arthur Baker. It's true that the style doesn't fit the song, and it's generally true that the style doesn't fit Dylan at all. But even in an alternate arrangement released on the Bootleg Series, I find this song a little too diffuse to enjoy. It's a variation on the theme of Dylan addressing a former lover for whom he still has feelings, but he's been burned enough to know better that the person he's missing has made him feel bad too. He meanwhile predicts that all sorts of things will happen when the night comes, most of them involving her coming around to him in some way, whether he’s willing to give or not.

1. He's returning. You have smoke in your eye because you've been burning his letters.
2. He might love you or you might love him. Doesn't matter.
3. You're hurting, but you managed to escape disaster.
4. He doesn't have all the answers. He wouldn't lie to you and say he did.
5. He thinks you've been seeing somebody, though you've not said so.
6. Some people have been victims of darkness and the lust for money. Not us.
7. He sees his reflection in your tears. He doesn't want to be starving for affection, nor does he want to drown in someone else's wine.
8. He'll always remember "that icy wind that’s howling in your eye." You might find him in the wasteland of your mind.
9. He wrote you a letter as you were "gambling" for support. As we know, it was cold that day so you burned the letter. He has a better memory these days so he'll remember this about you.
10. He asks for freedom and you'll give it. If not, he'll take it anyway. 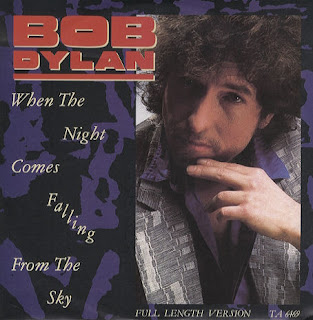 Posted by Robert MacMillan at 12:34 PM

Labels: 1985, Empire Burlesque, When the Night Comes Falling From the Sky