The grass doesn't grow
Under Bob's feet. One girl down,
He finds another.

Another in the "peevish lovers" edition of the Dylan catalogue, "4th Time Around" is widely seen as a response or a parody or an affectionate love tap in return for John Lennon's song "Norwegian Wood," itself a fairly clear take on a Dylan song. The song appears on the "Blonde on Blonde" album from 1966, and finds the singer taking selfish positions against his lovers even as he knows that it pisses them off.

Verse 1:
She says he's a liar and they indulge in a staring contest. He's had enough, she reminds him that you don't get a free lunch in this universe. The implication is that she's the lunch.

Verse 2:
He questions the free lunch philosophy. She says, "don't get cute." He hands her a stick of gum, presumably as payment. You can see at this point that the conversation probably won't improve.

Verse 3:
It doesn't. The gum doesn't impress her so she tosses him onto the street. He forgot his shirt so he asks for it. While she gets it, he contemplates a picture of "you," whom I've always taken to be the second woman in the song.

Verse 4:
The picture of "you" leans against the first woman's bottle of Jamaican rum. He asks for some, she says no. He says he doesn't understand her because of the gum in her mouth. She finds this extremely upsetting, and he seems to feel that he has scored points. He checks out her drawers, takes something from it, and then...

Verse 5:
He heads over to see "you." He and the second woman embark on an affair, only to have him chastise her for leaning too heavily on him when he never did anything of the sort. 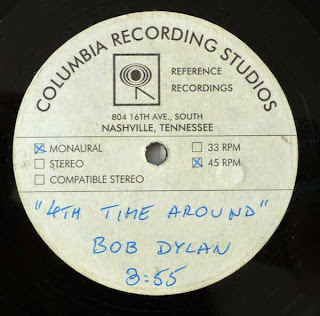 Posted by Robert MacMillan at 1:44 PM