If you can name it,
You probably can break it.
You think I'm jokin'?

"Everything Is Broken" is like swinging at the most depressing bar in the bayou. From 1989's "Oh Mercy" album, and produced by Quebec's swampiest, most atmospheric producer, Daniel Lanois, "Everything Is Broken" feels like some dark take on a party song. Dylan's in a reasonably sour mood here, though it's up to us to determine whether everything is really broken or whether it's the perception that counts.

Here's the boulevard of broken things:

What people are doing:
Sleeping (improbably), jiving (don't bother), joking (there's no point), speaking (futile), hitting the ground (every time you turn around), breathing (but you're choking), bending rules (they're broken anyway)

What the animals are up to:
Hound dog's howling. Bullfrog's croaking.

What you're doing:
Leaving.

How that affects me:
When you go away, things fall apart right in my face. 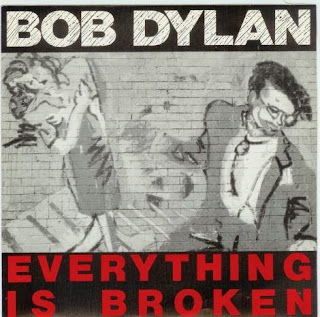 Posted by Robert MacMillan at 5:04 PM

Labels: 1989, Everything Is Broken, Oh Mercy