Edge of the Ocean

On the ocean's edge,
Something is on its way
When the seagulls come.

This 1967 Basement Tapes track wasn't included on the old bootlegs of those sessions, I think. Its first appearance, therefore, was in 2014 on the official release of the sessions in volume 11 of the Bootleg Series. It's a melancholy track with lyrics that don't make all that much sense. I think, and have said before, that Dylan was experimenting with words as sounds and rhythm, and creating feelings out of words that weren't necessarily arranged in sentences that you could diagram. Or he was stoned. Or he was messing around. Or something. I haven't tried transcribing the words of this song, but someone did on the Stevehoffman.tv discussion forum:

upside down....we're living on the edge of the ocean with a mockingbrew
ready to frown...with a fleet right over my window...well, always ocean round
well, ever up on every morning...brother, brother was in my sound...but let me tell you,
brother, it won't be when the seagulls cross over town

If life hands you corned beef hash, open the can and see what comes out. 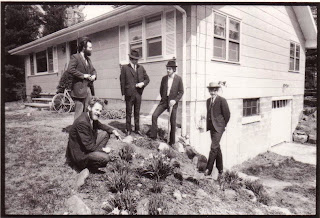