Don't Fall Apart on Me Tonight

"Don't leave me yet," he says.
"We can work things out. Just keep
Your shit together."

Dylan brings a great title and great music from a great band to the closer of the 1983 album "Infidels." Mark Knopfler and Alan Clark from Dire Straits? Sly and Robbie? Mick Taylor from the Rolling Stones? The sound is smooth and warm, and the melody leaps around, aided by some kind of compressed harmonica sound (Music people, please tell me how they make it sound that way) and the light-as-bread Knopfler guitar sound. The lyrics are where things get dicey. The song comes from that time in the 80s when Dylan was finding strange new ways to lecture women instead of the old way of ruing their departure and pouring scorn on them. In "Don't Fall Apart on Me Tonight," he makes a plea to keep her from going, but you can hear the beginnings of the cranky old man start to emerge from the first years of middle age:

- Questioning motives: What is it that you're trying to achieve girl?
- Better in here than out there: The streets are filled with vipers, even the Vatican is unsafe.
- Can your friends tell you what's wrong from right?

Then he points out that she shouldn't fall apart on him because HE doesn't think he could handle it. You have to think of No. 1.

The self loathing, as a result of all this lecturing, is more effective than at other times. At least he sees the fault in himself:

"I wish I'd have been a doctor
Maybe I'd have saved some life that had been lost
Maybe I'd have done some good in the world
Instead of burning every bridge I crossed."

I've never figured out, meanwhile, who the millionaire with the drumsticks in his pants is, but I love the line about how "He looked so baffled when he played and we didn't dance."

Then there's the total mystery of what are the "mudcake creatures" that are lying in her arms. It sounds like a relationship make-up session conducted in the pages of "Naked Lunch."

The album track is here: 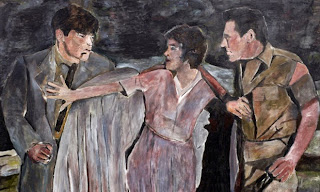 Posted by Robert MacMillan at 3:01 PM