Prison guards kill George.
They were afraid of his love.
Being black? No help.

"George Jackson" is one of the few Bob Dylan songs in his commercially available catalogue that is nearly impossible to find. He released the song as a single in November 1971, with a band version on the A side and an acoustic version on the B side. You can buy the single on vinyl through various online shops. The acoustic version also appears on the "Sidetracks" album that accompanies the complete Dylan album collection reissues series. The "big band" version is available on a compilation album called "Masterpieces," released in 1978, but only in Japan and Australia. It's possible to find copies in the USA, but usually at a prohibitively high price.

The song is a fictionalized account of the death of George Jackson, who was shot dead by guards as he tried to escape from San Quentin Prison in August of the same year. Jackson was a Black Panther leader after being introduced to Marxism and Maoism through a friend. He was sentenced to one year to life in 1961 for armed robbery ($70 from a gas station), and was 18 when he went to jail. He became a celebrated author, though prison authorities said he was a sociopath who had no interest in revolution. The tale grew darker from there, and you can read about it online. He died on Aug. 21 after securing a gun and attempting to break out of the prison. He and other inmates took guards hostage, and six were killed while several others were shot and stabbed, but survived. Jackson was shot in the prison yard.

Dylan's song does not mention these events, instead making a more general statement about long prison sentences disproportionately handed out to black men, and pointing to a system that dehumanizes people and leads to violent behavior.

I woke up this mornin’
There were tears in my bed
They killed a man I really loved
Shot him through the head
Lord, Lord
They cut George Jackson down
Lord, Lord
They laid him in the ground

Sent him off to prison
For a seventy-dollar robbery
Closed the door behind him
And they threw away the key
Lord, Lord
They cut George Jackson down
Lord, Lord
They laid him in the ground

Prison guards, they cursed him
As they watched him from above
But they were frightened of his power
They were scared of his love.
Lord, Lord,
So they cut George Jackson down.
Lord, Lord,
They laid him in the ground.

(Note: in fairness to copyright holders, I wouldn't normally post the lyrics in their entirety. Given the lack of easy availability of the song for most music buyers today, I thought it would be OK in this case) 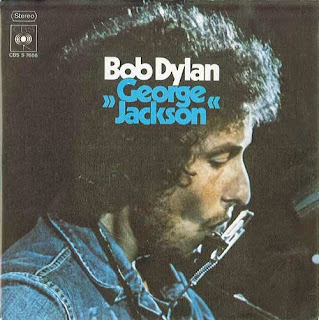 Posted by Robert MacMillan at 12:06 PM