This part of Dallas,
Is thick with thieves. Your daddy
likes to hang out there.

Deep Ellum is a neighborhood in Dallas, not far from the Baylor University Medical Center. It's an arts and entertainment spot these days, but nearly a century ago it played host to more bawdy forms of the arts (theft, and so on) and entertainment (drugs, gambling, etc.). It was also a hot spot for blue musicians from Blind Lemon Jefferson to Robert Johnson to Bessie Smith. The song "Deep Elm Blues," or "Elem" or "Ellum," depending on how different people spelled it by its popular pronunciation, is an oft-performed ode to -- or warning about -- the fun, sinful side of town. Les Paul, Jerry Lee Lewis and the Grateful Dead all have performed versions of this song.

Bob's version, which he performed live in New York in the early 1960s, contains advice and news, namely:
1. Keep your money in your shoes while in Deep Ellum.
2. Notice to pretty mama: your daddy has the Deep Ellum blues.
3. When Bob went to Deep Ellum, it was on a one-way track. He took his money and never gave it back.

The song appears on the first volume of the limited-edition 50th Anniversary Collection.

Here's a 1981 version by the Grateful Dead, which contains another verse about the preacher who discovered the Deep Ellum Blues, and now, of course, his preaching days are through. 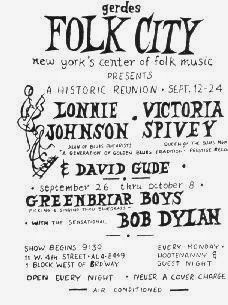 Posted by Robert MacMillan at 1:00 PM