Pride's a deadly sin,
And just about everyone's
Out to break the law.

"Foot of Pride" barrels through its six-plus minutes on attitude and fine music. What's it all about? The haiku contains the central message, while the song radiates in all directions with unrelated stories that begin and end in just a few seconds. The song was recorded for the 1983 album "Infidels," but was struck out, and surfaced in 1991 on the first Bootleg Series album. The first time I heard the words to the song was when Lou Reed performed the song for the Columbia Records concert to celebrate Dylan's 30th anniversary on the label. You can hear the Band and Reed struggling with the lyrics and the music, and you can't blame them (though their version, which sounds unrehearsed, makes up for most of its infractions in raw power. Find the video below). Dylan's lyrics are all over the place, and there are so many words that I would challenge anyone to try this in karaoke just to see how it goes. But as far as flawed gems go in rock n' roll, I love this song. The keyboard keeps an appropriate two-chord drone going through the verses, adding more only during the chorus. The song conveys menace, humor, irony and apocalyptic warning, and sounds pretty cool all the while.

Morality tales of "Foot of Pride," featuring a cast of characters who embody this deadly sin:
- "Like the lion tears the flesh off of a man
So can a woman who passes herself off as a male."
- The preacher who talked about Christ betrayed and who was swallowed by the earth.
- Icarus
- Keeper lyric: "You know what they say about bein’ nice to the right people on the way up
Sooner or later you gonna meet them comin’ down."
- Your brother named James. He drinks, swears revenge and claims the sun.
- The "fall-by-the sword love affair with Errol Flynn." I always thought it was "sordid," but either works.
- Red, the retired businessman. "He feeds off of everyone that he can touch." He sells tickets to a plane crash. You get how a guy like that can be.
- His lady is Miss Delilah, a philistine. She'll give you what you want "If you don't mind sleepin' with your head face down in a grave."
- Bilderberg floor show: "They like to take all this money from sin, build big universities to study in
Sing 'Amazing Grace' all the way to the Swiss banks."
- Beautiful people: another keeper lyric: "They kill babies in the crib and say only the good die young."

Through it all, Bob reminds them: "When your foot of pride come down, Ain’t no goin’ back." 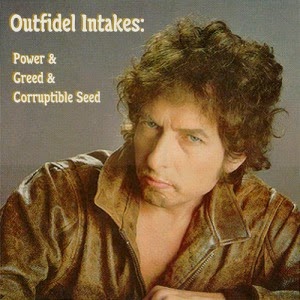