Please don't let me down.
I'm sad despite my jugglers
And five believers.

This is a rock and roll blues song off the 1966 album "Blonde on Blonde." There are a few throwaway lines, but the general takeaway is one line he sings twice:

"Yes, I could make it without you
If I just did not feel so all alone"

Here's the breakdown of the rest of the song:

1. Early in the morning, he's calling you to come home. He could make it without you, but it would make him lonely.
2. He won't let you down if you don't let him down. He WOULD let you down if you did let him down, but all the same, it would be better if you didn't.
3. His black dog is barking in the hard. He could translate the dog's remarks, but it's too much effort.
4. Your mother is crying while working. He could translate your mother's remarks, but he doesn't speak in her mother tongue.
5. Fifteen jugglers and five believers are dressed like men. Your mother appears concerned about them, but she shouldn't be because they are his friends.

The title seems like one of those artistic attempts to cast an oblique view on the song by referring to something that's only glancingly significant to it, sort of like authors who write books about things like the Russian Revolution or war or a love affair, and give them titles like, "The Proper Way to Clean Taffetta" or "I Am Curious (Yellow)." It also fits with Dylan's repeated attempts to use adverbs in his song titles from this time: "Positively 4th Street," "Absolutely Sweet Marie," "Queen Jane Approximately," "Just Like Tom Thumb's Blues," and so on. 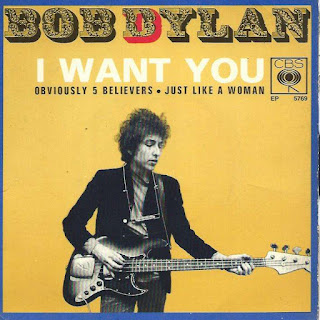 Posted by Robert MacMillan at 1:28 PM