Tangled Up in Blue

A couple breaks up.
He sorts of meets her later,
But he keeps drifting.

"Tangled Up in Blue" is one of Bob Dylan's signature tunes. The opening track of the 1975 album "Blood on the Tracks" is instantly recognizable and arguably as fundamental a part of Dylan's work as "Blowin' in the Wind" or "The Times They Are a-Changin'" or "Like a Rolling Stone." Unlike these songs, "Tangled Up in Blue" is an only slightly detached account of a relationship and two lives and how their connection fell apart without ever really being severed. You could argue that the song is far too personal and, in its way self pitying, to resonate with such a wide audience, but I think that people who love the song identify with the sad drifters/lost lovers of the song. I don't; I like the song for its strong if sometimes vague storytelling, and for the music that keeps pushing the song forward. It's also noteworthy for its changing narrative perspectives and its apparent disregard of linear time.

How tangled?
1. He's lying in bed wondering what she's like nowadays. He should have known it wouldn't work out. Her parents said as much. They thought his parents were too poor for her (mama's homemade dress, daddy's bank account). Now he's standing on the road in the rain, hoping to hitchhike to the east coast.
2. She was married when they met, but she got divorced -- with his help. They had a long run, but broke up in the darkness of the night. She says they'll meet again. So far, this sounds vaguely autobiographical. And then...
3. He gets a job in Minnesota's North Woods, working as a cook. He then got a job on a fishing boat in Louisiana. He keeps thinking about his ex.
4. He meets a woman working in a strip club. He clearly means us to assume that he's talking about the former lover, but when she says to him, "don't I know your name," we're not so sure that she is the ex. Or that she's not. She ties his shoelaces, he feels uncomfortable.
5. She makes him a pipe back at her place, then shares with him some poems from an Italian poet in the 15th century, (13TH CENTURY?) whom I would take to be Dante Aligheri. He realizes that there's something between him and her, considering at the words she's chosen for him to read ring true and "glowed like burning coal, pouring off of every page like it was written in my soul from me to you."
6. Another shift: "he" is living with "them" in a basement apartment on Montague Street. I'm guessing the "them" of this verse is the "we" of the first three or the fourth and fifth verses. There's music and revolution, but once "he" starts dealing with slaves, he's no longer the man he used to be. She suffers because of his work (which I always thought meant dealing "in" slaves, as in a slave trader, but I wonder if "dealing with slaves" indicates something more personal, like, say, dealing with the music business). They break up, and "he" keeps moving on. I think that if there's anyone here who Dylan is playing, it's both "he" and the "he" of "they." I know it sounds confusing.
7. Now we're back to the first guy. He's going to look for her and to try to win her back. Everyone that they used to know has changed into someone else, usually not for the better, but this one remains a traveler. And then he ends with that famous, cryptic line: "We always did feel the same, we just saw it from a different point of view." 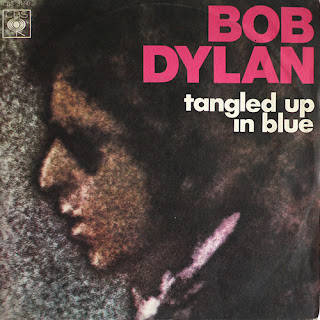 Posted by Robert MacMillan at 8:26 AM