The Times They Are a-Changin'

Change is coming soon
Whether you like it or not.
Don't be left behind.

If ever there were an anthem in the Bob Dylan catalogue, this is it. “The Times They Are a-Changin’” appeared in 1964 on the album of the same name, and quickly became one of his signature songs and certainly one of his most well known, even today. A twinning of the folk music “movement” and calls for social change and justice for black people, other minorities and everyone else who’s on the wrong end of the power structure in America. More broadly, it’s about accepting change because you have no choice.

Write:
Pay attention and write what you see. Be careful. Events are unfolding and who don’t know who’s on the upside. It could be the traditional loser.

Vote:
Politicians, don’t ignore the battle of the people on the streets. Things are changing, and your obstructions will be your downfall.

Move:
Your world is changing, old people. If you can’t get with it, get out of it. 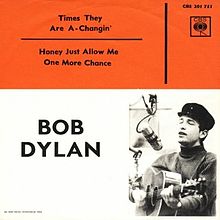 Posted by Robert MacMillan at 2:34 PM