"If I die, tell Mom,"
One soldier said to his mate.
But then they both die.

"Two Soldiers," also known as "The Blue-Eyed Boston Boy," is an old song from the Civil War, author presumably unknown. According to Lyle Lofgren, it likely is a story based on the battle of Fredericksburg in 1862. A blue-eyed boy and a tall dark man are fighting for the Union, and the boy asks the man to please tell his mother if he dies. He says he will do the same for the dark man. Both die in battle, and there is no one left to tell the boy's mother what happened, nor his blue-eyed girl. The song was released on the 1993 album "World Gone Wrong." 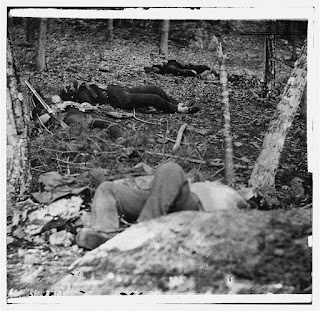