Rum, whiskey --> honey
Frisky. But my wife left me
'Cause I was risky.

"Diamond Joe" appears in the film "Masked and Anonymous," which features Bob Dylan among a cast of alternative-mainstream movie talent from the 1970s through the early years of the 21st century (John Goodman, Jessica Lange, Penelope Cruz and so on). I've never seen the movie, but what I have seen looks like a complete mess. That said, I still plan to watch it at some point, though I'm not sure how much of the self-regarding alterna-types I can take without getting cranky over their hipper-than-thou personas and the roots music that they dig.

Anyway, the song: Diamond Joe is an old song from the 1920s. In short, the singer gives his sweetheart rum and whiskey to get her frisky. He uses flour to make hoe cakes by the hour. The only problem with this sylvan paradise is that the singer's wife makes her dissatisfaction with the situation clear by leaving. In the chorus, the singer calls on Diamond Joe (a ferry boat? A river boat? A train? Some guy?) to come pick him up. Because of the ambiguity around the identity and organic status of Diamond Joe, I left him, or it, out of the haiku.

This song is the second song called "Diamond Joe" that Dylan recorded. It is not at all related to that other song, which appears on the album "Good As I Been to You."

A complete recording of the song is in the link at the beginning of this post. The only one that I can find on YouTube is a partial version from the film. 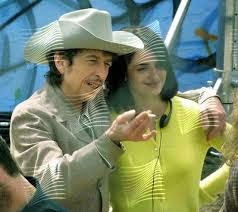 Posted by Robert MacMillan at 3:25 PM