Driftin' Too Far From Shore

She left by surprise.
Bob writes her off as a loss,
But this still grieves him.

"No gentleman likes making love to a servant, especially when he's in his father's house." The Dylanology forensics team down at the station might spend years working on that line, which appears like an inscrutable diamond in the rough that is "Driftin' Too Far From Shore," one of the tracks on side one of the 1986 misfire album "Knocked Out Loaded." I say misfire because that's what people who know it say about it. To be sure, there are some bad songs, but it's unfair to tarnish the whole thing just because of "They Killed Him."

"Driftin' Too Far From Shore" is a super-charged rocker of that distinctly '80s provenance -- big drums, small drum machines, self-consciously artificial synthesizers, big backup vocals, a bit of stadium delivery in Dylan's voice as he dismisses another lover who wasn't up to his standards, even though he misses her.

1. Oh, you were breaking up with me? Do you know whom you were talking to? Are we even? Actually, I think I'm one up on you.
2. I still send you money. You take it, but you're too far away to give.
3. No games, baby.
4. "I never could guess your weight, baby. Never needed to call you my whore." Glad we got that sorted out.
5. I had to wait for what I wanted, unlike some people.
6. You won't play with me because you're busy turning into a loser.
7. "We weren't on the wrong side, sweetness, we were the wrong side."
8. I probably won't answer the phone if you call. You see, I don't go outside in war zones. 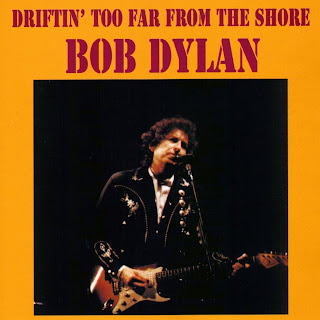 Posted by Robert MacMillan at 4:02 PM

Labels: 1986, Driftin' Too Far From Shore, Knocked Out Loaded