I can't decide if "Duquesne Whistle" is a song about death. There's no doubt that that train is blowing loud and fast into town, its little red light blinking. It's Bob Dylan's version of the little engine that could. I just suspect that it's going to bear Bob away just like it blows his blues away. Judging by the lyrics, it's a train that can't be ignored. And it makes me think of those old blues songs where the train takes away dead lovers -- funeral trains, and so on. The song appears on "Tempest," Dylan's latest album of studio originals, from 2012.

See what I mean?

Here's the video, which I find nasty and disturbing: 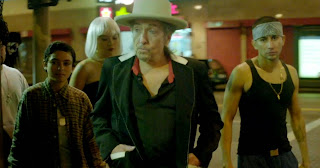