I'm a train person.
When the freight trains start moving,
I do the same thing.

"Freight Train Blues" is the template for songs about men who can't keep stay home and maintain healthy relationships because they're always catching a train somewhere. Dylan's wandering/train songs/ship songs usually deal with men who are traveling because they're sad, because they're seized by wanderlust, because they're trying to get out of a bad relationship, because they're looking for work and so on. This train song, which Dylan performed on his debut album, is more like a justification of rambling for the sake of rambling. The flaneur must flaner because of his inherent flanerie. Hank Williams and Roy Acuff have done the song as well.

1. Lived in a shanty by the railroad track.
2. Train taught me to cry.
3. Driver's holler my lullaby.
4. Train blues in my shoes.
5. Will never lose these blues.
6. Daddy was a fireman. Mama was an engineer's daughter.
7. Sweetheart a brakeman.
8. Only southbound train whistles make me laugh. 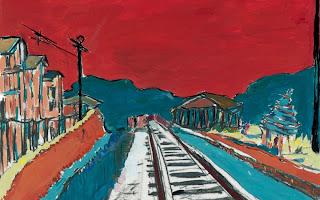