Man leaves a woman
To get some peace and quiet.
He hallucinates.

I live in perpetual confoundment of Bob Dylan songs containing the name Angelina. (There are two, but they're both strong confounders) The first of the two, "Farewell Angelina" from 1965, went unreleased until it appeared on the Bootleg Series Volumes 1-3 installation in 1991. The second, "Angelina," from 1981, appears on the same collection, having been left of the album "Shot of Love." "Farewell, Angelina" was possibly intended for inclusion on the album "Bringing It All Back Home," and to me it carries that same kind of sour-tongued fever dream Book of Revelations daytime nightmare feeling as "Gates of Eden." Lyrically, it feels like a dress rehearsal for "Desolation Row" and its rogue's gallery of hallucinatory Fellini extras. I say that I am confounded because neither "Farewell Angelina" nor "Angelina" yield their secrets easily. It might be that there are none, though I feel more confident saying that about the older song than the newer. Whatever Dylan thought of it, I don't know, but most of the exposure that the song has had to the public has been from Joan Baez, who named one of her albums after the song and has performed it often. Here is the song, deconstructed: 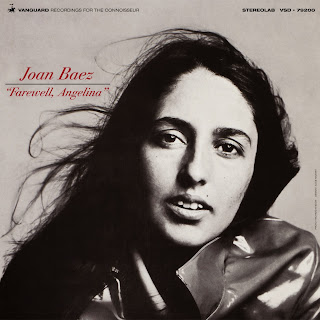 Posted by Robert MacMillan at 11:39 AM