In Search of Little Sadie

Man murders Sadie.
He tries to flee and is caught.
He goes to prison.

The story is simple and grim: A man shoots his lover, flees, is caught, returned and sentenced to prison, and feels really bad about it.

Dylan recorded the song twice, once as "In Search of Little Sadie," and again as "Little Sadie." They appear on the same album, the ultimately unknowable "Self Portrait" of 1970.

Went out last night to take a little round.
I met my little Sadie and I brought her down.
I ran right home and I went to bed
With a forty-four smokeless under my head.

I began to think what a deed I'd done.
I grabbed my hat and I began to run.
I made a god run but I ran too slow;
They overtook me down in Jericho

Standing on a corner a ringin' my bell,
Up stepped the sheriff from Thomasville.
He said 'Young man is you name Brown?
Remember you blowed Sadie down."

"Oh yes sir, my name is Lee. (NOTE THE CHANGE OF NAME EVEN AS HE ADMITS THE CRIME. WHO DOES THAT EXCEPT TO PRESERVE A RHYME?)
I murdered little Sadie in the first degree.
First degree and second degree.
If you've got any papers will you serve them to me?"

Well they took me down town and they dressed me in black,
They put me on a train and they sent me back.
I had no one to go my bail;
They crammed me back into the county jail.

Oh, yes they did.
The judge and the jury they took their stand.
The judge had the papers in his right hand.

Forty-one days, forty-one nights;
Forty-one years to wear the ball and the stripes;
Oh, no!

Went out last night to take a little round.
I met little Sadie and I blowed her down.
I ran right home and I went to bed,
A forty-four smokeless under my head. 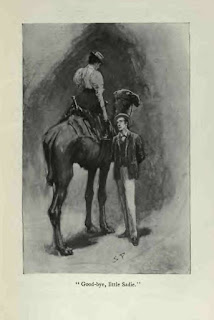