Mobster Joe Gallo
Shoots up the town, goes to jail,
Gets out, gets murdered.

I'm not a "Joey" fan, though not because it's historically inaccurate. Nobody asked Dylan to write a musical documentary of Crazy Joe Gallo. I just can't accept the elegiac tone that Dylan and co-writer Jacques Levy apply to the story. I like mob movies and I'm a fan of "The Sopranos," and I can understand how killers, drug dealers, loan sharks and other such people have emotions, feelings, families and so on just liek we do, and that bad things happen to them too. But to devote 11 minutes of sympathy to someone like Joe Gallo seems like a stretch. You can find the song on "Desire," which Dylan released in 1976.

1. Born in Red hook. An outsider.
2. Nicknamed "crazy."
3. Gamblers. Poor things, always caught between the mob and the police.
4. Why did they want to kill the poor guy?
5. People say they killed their rivals, but that's a lie. When someone tried to kill Joey's brother Larry, he went out for revenge.
6. Mob war. The Gallos take hostages.
7. Someone says, let's kill the hostages. Joey says no. We need "peace and quiet." This is after he starts a war.
8. Police arrest him. He gets 5-10 in Attica.
9. He reads Nietzsche (and William Reich, say the lyrics, though I don't recall hearing it that way)
10. He gets solitary.
11. He gets along with black men, a sign of his moral superiority and innocence because they all know whta it feels like to be slaves
12. He gets out in 1971. He lost weight. He wants his old job back.
13. He stops carrying guns because he's around kids too much. He robs his rival's clubhouse.
14. He gets shot while at dinner at a clam bar. He dies on the streets of Little Italy.
15. His sister and mother cry. His friend Frankie refuses to accept that he's dead. His father's limousine goes back to the grave one last time.
16. The sun sets and Brooklyn mourns for Joey. God will punish his killers. 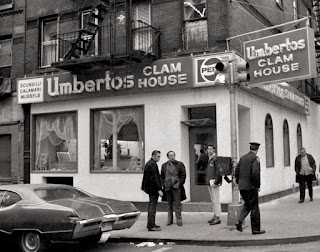 Posted by Robert MacMillan at 3:35 PM