Bob tells this girl
That he's not there at all, though
She's looking for him.

There are lots of people who make lots of hay about "I'm Not There," one of the Basement Tapes bootlegged tracks that came to mainstream prominence in Todd Haynes's film of the same name. Some people point to the profound lyrics and stair-climbing melody, and refer to it as a lost masterpiece, a mysterious beauty from the shadows of Dylan's undiscovered (at the time) catalogue. I don't get it. I think it goes on far too long and that the words don't make any sense. I don't mind Dylan's arbitrary choice of words to hold down a pattern as a rehearses a song, but I'm of the opinion that whatever people think is there, it's actually not there at all. Which I guess is what Dylan was getting at in the title of the song. You can find it on volume 11 of the Bootleg Series.

Here are the lyrics, complete with chord changes. I think there might be more words than these, but this is the most reliable set of words I could fine. Decide for yourself:

G
No I don't belong to her
F
I don't belong to anybody
Am
She's my prize forsaken angel
G
But she don't hear me cry
G
She's a lone-hearted mystic
F
And she can carry on
Am
When I'm there, she's all right
G
But she's not when I'm gone 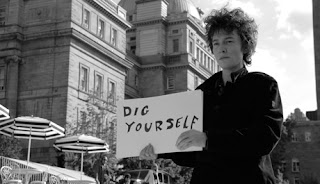 Posted by Robert MacMillan at 4:31 PM