Lily of the West

Young Flora trades up.
Her ex kills her new boyfriend.
He goes to prison.

Another siren singing her song and luring men to their doom, Flora is the so-called "Lily of the West." She and the story of her jealous lovers appeared on the 1973 album "Dylan," having been salvaged by Columbia Records from sessions that Bob Dylan recorded several years earlier. Most critics regard the album as a weak hodgepodge of Dylan slumming it through various traditional songs, though I like his Nashville-ish country sound of the period. This song does contain an annoying harpischord or some kind of antique keyboard instrument, but I think it's a consequence of the slapdash overdubbing that the producers stuck on the rehearsal tracks. I still wonder whether the attitude in this  As for the song, it's an old Irish and English ballad, and has been covered many times by many people. A man falls in love with Flora, a girl in Louisville. She leaves him for another man. He kills the new guy and goes to prison, and remains in love with Flora. Don't try this at home. 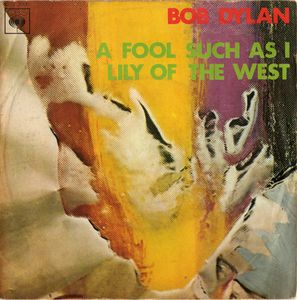 Posted by Robert MacMillan at 11:48 AM