I Shall Be Released

A man in prison
Awaits release. His friend says
He was wrongly jailed.

Faith, imprisonment, deliverance. "I Shall Be Released" doesn't spell it out, but you get the impression that the singer is a prisoner. Whether he's literally behind bars or trapped here in life on earth is hard to say, and perhaps irrelevant. I would argue that the singer is in prison, but I usually search for the simplest meaning in a song. The more important theme here is the release from caring about circumstances, which I guess is in some sense a release from caring about life because, after all, it'll be over at some point and then there won't be any confining walls anymore.

1. They say ev’rything can be replaced
Yet ev’ry distance is not near

Maybe: Nothing is permanent, nothing is so precious as to be indispensable. Separately, the space that divides me from you, and ourselves from everything else in our minds and in the world, is insurmountable. No one knows what the other person has, thinks or feels. True communication is impossible, we're all trapped and so on.

2. So I remember ev’ry face
Of ev’ry man who put me here

I'm not sure why this is a consequence of the previous lines. I think this is more literal: You don't wind up in a prison of any kind if you're innocent unless other conspired against you. Framed, etc.

3. Chorus:
I see my light come shining
From the west unto the east
Any day now, any day now
I shall be released

I never thought much about why the light comes from the west to the east unless it means that all he sees is the reflection of the sun against the prison glass, indicating that his world is turned around and everything moves backwards because he's in the mirror image of a free world, ie, a bonded world. As for any day now/released, that could be release from bondage or release from life.

You're nobody until somebody loves you. That's one way to put it. Or, everyone needs a rabbi. Even then, everybody gets what's coming to them, and everyone must take a fall at one time or another.

5. Yet I swear I see my reflection
Some place so high above this wall

The reflection of himself as a free man, or perhaps his spirit, considering that it's high above the wall. Like, in heaven.

6. Standing next to me in this lonely crowd
Is a man who swears he’s not to blame
All day long I hear him shout so loud
Crying out that he was framed

If you want to get deep about this line, you could say that the other guy is actually the narrator. Maybe this is the man who has been delivered of his earthly cares and concerns looking at the other side of himself, his reflection, who still longs for freedom, even though being on the outside again won't be different than being on the inside.

Maybe that's all nonsense. I'm not a professor, and I don't teach the meaning of Dylan songs to undergraduates, but it's all interesting and fun to think about.

Here are two versions. The first is from the Band's first album, "Music From Big Pink." It's my favorite version of the song. Rick Danko sings like an angel. The second version is one of the takes that Dylan and the Band performed during the 1967 Basement Tapes sessions. It's available on volume 11 of the Bootleg Series. There is another version, performed by Bob Dylan and Happy Traum on the second of Dylan's greatest hits albums. I couldn't find a version online that I could post here. 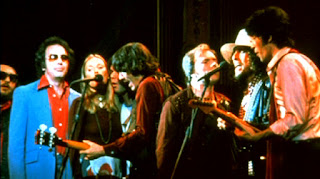 Posted by Robert MacMillan at 12:29 PM