Let Me Die in My Footsteps

Bob says, if there's war,
Let him die outside, not in
A fallout shelter.

Better to die standing up than on your knees, more or less. "Let Me Die in My Footsteps" is Bob Dylan's reaction to fallout shelters and the threat of nuclear war. Dylan suggests that it's better to enjoy the world and its natural wonders and if you must die, you die amid them rather than cooped in a living grave.

And:
Let me drink from the waters where the mountain streams flood
Let the smell of wildflowers flow free through my blood
Let me sleep in your meadows with the green grassy leaves
Let me walk down the highway with my brother in peace
Let me die in my footsteps
Before I go down under the ground

Go out in your country where the land meets the sun
See the craters and the canyons where the waterfalls run
Nevada, New Mexico, Arizona, Idaho
Let every state in this union seep down deep in your souls
And you’ll die in your footsteps
Before you go down under the ground

The song was intended for the 1963 album "The Freewheelin' Bob Dylan," but replaced by "A Hard Rain's a-Gonna Fall." It appeared on the album "The Broadside Ballads, Vol. 1," and after that on the first edition of the Bootleg Series in 1991. 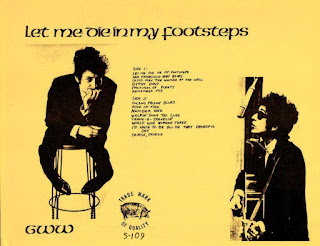