He'll remember her
Even though she left because
He did things his way.

"I'll Remember You" is probably on the set list of "greatest slow dance songs" maintained by somebody about my age who surely must have encountered it during a high school gym dance. It appeared on the 1985 album "Empire Burlesque," complete with big Arthur Baker production, and dropped out of sight after that. Its only other appearance that I know of on any album associated with Dylan is the soundtrack of the film "Masked and Anonymous," where Dylan performed it with a gentler band and a gentler production hand.

Either way, there's not much to recommend the song other than its sweet sentiment. The lyrics are a reach.

"Didn’t I sleep, didn’t I weep beside you
With the rain blowing in your hair?"

The line that made the haiku for me was this one:

"Though I’d never say
That I done it the way
That you’d have liked me to
In the end
My dear sweet friend
I’ll remember you." 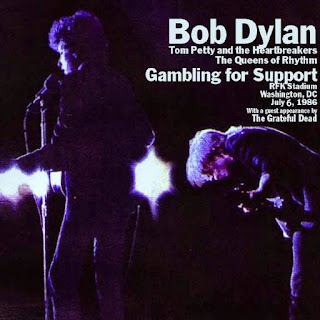 Posted by Robert MacMillan at 2:27 PM