Lenny was the best.
He was funny and truthful,
And better than you.

Bob Dylan's eulogy to comedian "Lenny Bruce" arrived in 1981 on the "Shot of Love" album, 14 years after Bruce died. It's a ham-fisted ode that serves mostly to chide the listener over his or her ability to be as real and as human as Bruce.

1. Lenny dead. Ghost alive. He never won no Golden Globe award. He was more outlaw than you ever were.
2. He had problems. He was funny. He was truthful. He was knowledgeable. He wanted to die.
3. He committed no crime. I rode with him in a taxi for 1.5 miles, but it felt like months. He's gone, just like the people who killed him.
4. He was lawbreaker, they called him sick. He showed wise men up as fools. They labeled him "like they do with pants and shirts." He fought in a war where victories hurt. He was bad. He was the brother you never had. 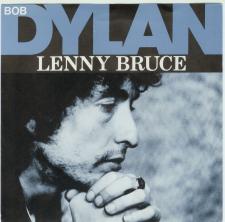 Posted by Robert MacMillan at 12:18 PM