This is a decree
From the king: You are informed
That Jolene is queen.

"Jolene" -- not the Dolly Parton song of the same name -- is an inoffensive enough song on "Together Through Life." The lyrics reinforce one major point:

Jolene's other qualities include walking down High Street in the sun, making dead men rise because of her charms, making Bob get a gun and sleep by your door, making Bob willing to sacrifice himself for you, arousing Bob toward feelings of possessing you, making him keep his hands in his pockets and moving along, steering Bob toward thoughts of gambling, her big brown eyes that set off sparks and her ability to make a pessimist feel like an optimist. 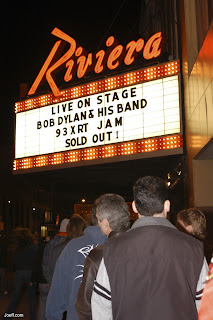 Posted by Robert MacMillan at 1:33 PM

Labels: 2009, Jolene, Together Through Life