I Was Young When I Left Home

He rambled while young.
While boozing, he hears Mom died,
But he can't go home.

Bob Dylan recorded this song on the famous and widely bootlegged "Minnesota Hotel Tape" on December 22, 1961, in Minneapolis. It made its first commercial appearance in volume 7 of the Bootleg Series, the soundtrack album to Martin Scorsese's 2005 documentary on Dylan, "No Direction Home." It's a story about just what you think.

- Guy leaves home, never writes to his parents.
- Collects his pay, runs into a guy who tells him his mother's dead and his sister's "all gone wrong," and dad needs him home immediately.
- He doesn't have enough money, clothes and, apparently, reputation to do this.
- You can gauge how far he is from home by the sound of the train whistle.
- He needs to pay his debt to the commissary, pawn his watch and chain, and go home.
- He misses his mother. He doesn't like being out in the windy plains, even though he thought he would before he went out roaming. 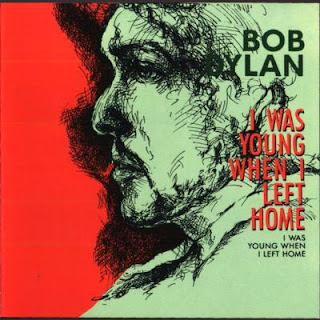 Posted by Robert MacMillan at 3:27 PM