That's a nice new hat.
But I wish you would not let
Your lovers wear it.

"Leopard-Skin Pill-Box Hat" is a rollicking blues number that provides the slightest bit of comic relief on the otherwise broad and rangy but consistently downbeat masterpiece album "Blonde on Blonde," from 1966. The pill-box style is classy, the leopard-skin is not. The lady in question wears the hat and charms her admirer, all while behaving poorly toward him.

1. You have a new leopard-skin pill-box hat. How does your head feel in it?
2. You look pretty in it. I want to jump on it. It's expensive. It balances awkwardly on you - "just like a mattress balances on a bottle of wine."
3. We should go watch the sun rise. I'll wear my belt on my head. You wear the hat.
4. The doctor told me I shouldn't see you because it's bad for my health. I went anyway. I found him there. You were cheating on me with him, and the bugger was wearing your hat.
5. You have a new boyfriend. I saw you and he doing it in the garage because you forgot to shut the door. You think he wants you for your money, but I know that he wants you because of the hat. 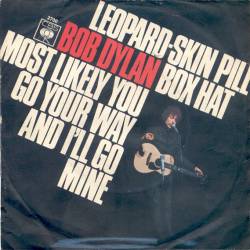 Posted by Robert MacMillan at 12:32 PM