These flood-water blues
Don't pick and choose. Just? Unjust?
You will get rained on.

Dylan's song "High Water (For Charley Patton)" comes from his 2001 album "Love and Theft." It's a pastiche of old blues song lines (dust my broom, Bertha Mason, the cuckoo is a pretty bird and so on), and named for a song by the late blues master Patton. It's a strong, compelling song, full of the dark foreboding of storm clouds and rising flood waters. It also contains one hell of a banjo part. Like many of Dylan's more recent song, each verse feels self contained.

What's happening:
- Gold and silver being stolen
- Big Joe Turner made it to Kansas City. He's thinking dark thoughts on the corner of 12th and Vine. High water.
- Shacks are falling
- People leaving
- Possessions lost
- Bertha Mason says: "You're dancin' with whom they tell you to or you don't dance at all."
- Coffins dropping in the street
- Water in Vicksburg
- The judge is looking for Charles Darwin trapped out on Highway 5.
- The cuckoo is a pretty bird, as we know from the old folk song.
- Fat Nancy isn't feeding Bob like he asked.
- Bob's thinking about dusting his broom in the morning, like Robert Johnson said.
- Thunder over Clarksdale, Mississippi.
- Bob can't be happy if you're not happy.

There's one break in the doomy spell:

"I got a cravin’ love for blazing speed
Got a hopped-up Mustang Ford
Jump into the wagon, love, throw your panties on the board
I can write you poems, make a strong man lose his mind
I’m no pig without a wig
I hope you treat me kind."

At least someone's having fun down in the flood. 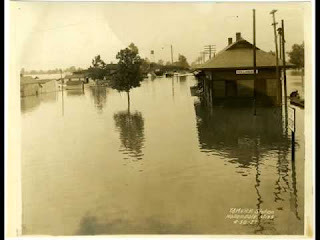