Handy's been around.
He likes a drink, gets things done.
What keeps him going?

I've never met anyone who likes the album "Under the Red Sky." I can understand why. As I've written in other haiku entries, it's a hard one to like. Some of the lyrics are ridiculous, and the music, given all the star power that went in to recording and producing it, is pedestrian. After the success of the previous album "Oh Mercy," itself a comeback after what many people considered several uninspired, dull misses, people probably were expecting Dylan to stay on top. That's fine. Songs like "Handy Dandy" are the reason I like it.

It was a hard one for styling as haiku go because the song is a portrait of the man and not so much of a story. And he's a hard portrait to get in focus because he seems to be made of many people, all somewhere between artist and bullshit artist. He reminds me of the people we call "larger than life." Medicine show salesman, crazy uncles who whirl in to town from time to time and amuse the kids, things like that -- but they always have some private weakness or hurt that they've papered over with boasts, words and a desire to please everyone by doing what they can, even though they might be cons:

- Controversy surrounds this world traveler, and something in the moonlight hounds him.
- He's just like sugar and candy.
- He could take a beating and would never admit that he had all his bones broken.
- He has an all-girl orchestra.
- Dialogue: You say: "what are you made of?" He: "Can you repeat that?" You: "What are you afraid of?" Him: "Nothing!"
- He has a stick and money.
- When he asks a lady how much time he has, she says he can have it all.
- He has a crystal fountain, soft skin and a fortress on a mountain.
- He says: Need a gun? She says, are you crazy?
- He likes his brandy.

The last verse of the song is one I like to repeat because it's among my favorite Dylan lines. The song is a full-on electric band fest, a proper up-tempo number. But listen to the sadness of the loser in these lines: 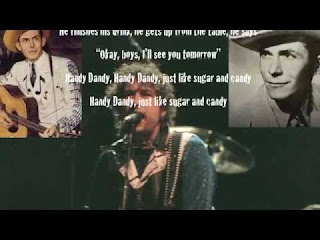 Posted by Robert MacMillan at 2:52 PM