Remember the poor
While you're rich and having fun.
They're outside your door.

The full title of this song by American parlor music composer Stephen Foster is "Hard Times Come Again No More." The song is a plea to people wealthy enough to live comfortably to remember that the poor and their troubles are never far away, and to spare a thought for people who are in the midst of hard times. The music, like most parlor songs of the 19th century, is simplistic and sappy, but Dylan gives it a tough edge on his 1992 album "Good As I Been to You."

Let us pause in life's pleasures and count its many tears,
While we all sup sorrow with the poor;
There's a song that will linger forever in our ears;
Oh! Hard times come again no more.

While we seek mirth and beauty and music light and gay,
There are frail forms fainting at the door;
Though their voices are silent, their pleading looks will say
Oh! Hard times come again no more.
Chorus

There's a pale drooping maiden who toils her life away,
With a worn heart whose better days are o'er:
Though her voice would be merry, 'tis sighing all the day,
Oh! Hard times come again no more.
Chorus

'Tis a sigh that is wafted across the troubled wave,
'Tis a wail that is heard upon the shore
'Tis a dirge that is murmured around the lowly grave
Oh! Hard times come again no more.

Foster, the "father of American music," wrote a number of other well known songs that became, and in some cases, remain well known to any beginner piano students, including "Beautiful Dreamer," "Camptown Races," "Jeanie With the Light Brown Hair," "My Old Kentucky Home," "Oh! Susanna," "Old Black Joe" and "Old Folks at Home."

Here's a live version from a performance to celebrate Willie Nelson's 60th birthday: 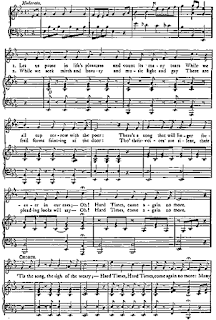