Poor folks in New York.
Bob wants to live there, but he
Loves to hate the place.

"If you got a lot o' money you can make yourself merry. If you only got a nickel, it's the Staten Island Ferry." "Hard Times in New York Town" is one of Dylan's earliest songs, recorded in 1962 and released later on the first volume of the Bootleg Series. It's a Woody Guthrie-style ode to New York City, giving the listener both sides of town depending on how much or little money they have.

It has robber barons:

"Mister Rockefeller sets up as high as a bird
Old Mister Empire never says a word."

It has unemployment lines:

"Well, it’s up in the mornin’ tryin’ to find a job of work
Stand in one place till your feet begin to hurt."

It has enough hardship to make you wish you had hardship elsewhere:

"I’ll take all the smog in Cal-i-for-ne-ay
’N’ every bit of dust in the Oklahoma plains
’N’ the dirt in the caves of the Rocky Mountain mines
It’s all much cleaner than the New York kind." 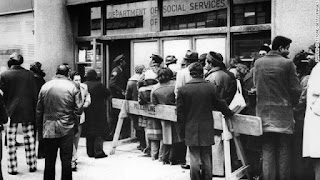