Gun-toting Maggie
Dropped me for another man.
I left, she's drinking.

I don't know much about "Little Maggie," but found a blog run by someone named Richard Matteson who says that it's a "white blues" song from the isolated mountains and hollows of rural Virginia. Judging by the lyrics, she's a catch for men who enjoy hard-drinking women who shoot guns. Bob Dylan recorded this song for the 1992 album "Good As I Been to You."

Oh, where is little Maggie
Over yonder she stands,
Rifle on her shoulder,
Six-shooter in her hand.

Rather be in some lonely hollow
Where the sun don't ever shine,
Than to see you be another man's darling,
And to know that you'll never be mine.

Well, yonder stands little Maggie
With a dram glass in her hand,
She's a drinkin' down her troubles
Over courtin' some other man. 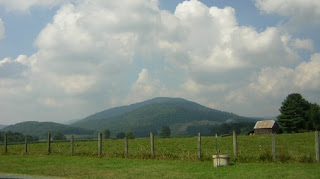