Bob hates his farm job.
He's tired of pleasing his fans.
He has other chores.

There are many interpretations of the lyrics of "Maggie's Farm," which Bob Dylan released in 1965 on the album "Bringing It All Back Home." The one that seems to carry the most weight is that it is Dylan's protest against the protest song business. Dylan spent his first few years achieving his lasting reputation as a folk and protest singer, but found it a bigger burden than he wanted to bear. Some say that "Maggie's Farm" is a pun on "McGee's Farm," a place where he performed a memorable version of his protest song, "Only a Pawn in Their Game." I would also note that "farm" meant "prison" to a lot of old-time blues singers and prisoners in southern jails. Seen through that lens, we have:

1. Not going to work on Maggie's farm anymore. Got lots of ideas struggling to get out, but I'm stuck on this menial floor-scrubbing duty.
2. Maggie's brother is no good either. He pays tiny wages, sarcastically asks if you're enjoying yourself, and then fines you for minor offenses.
3. Speaking of Maggie, her father is a pain. He sticks his cigar in your face for fun. His window is bricked up and the National Guard stands around his door (paranoid).
4. Maggie's mother thinks she's so philosophical and with it, but she's really just operating her husband and lying about her age.
5. I'm trying to be the person I want to be, but everybody else wants me to be someone else. "They sing while you slave and I just get bored." 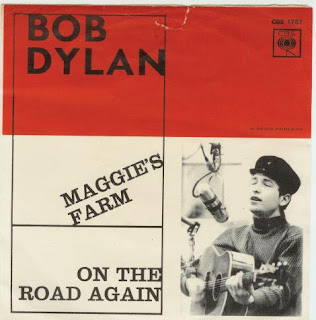 Posted by Robert MacMillan at 4:10 PM

Labels: 1965, Bringing It All Back Home, Maggie's Farm