It's easy to preach
When I think I know it all.
But I know nothing.

Bob Dylan spent two notable periods of his songwriting life as a preacher. The second was his three-year, three-album journey into Christianity, while the first was the period for which he is best remembered - that of a protest singer. "My Back Pages," so the interpretations go, is his renunciation of those kinds of songs. One of the difficulties for many of Dylan's original fans, as well as those who weren't even born at the time this song appeared (on "Another Side of Bob Dylan" in 1964), is accepting his music and therefore the songwriter as they see him despite much evidence that he is something else. The idea that Dylan was a folksinger or a protest singer is off base, somewhwat, and it plainly galled him that his career and identity would be defined that way. It was a career option at the time and it brought him fame, money and popular success, but like anyone who becomes known for something, we often want to transcend it, become known for how we want to be seen or how we really feel, and keep all the rewards that we've earned from that role into which we're typecast. The have/eat cake problem, in other words. Dylan's fans liked what they heard from him, and often have reacted poorly to what seem like abrupt changes, both as he grew as an artist and has he tried to shake off admirers who in many ways became demanding and irritable when he did change what he wanted to change about himself. I suppose there are plenty of postmodern theories that you can use to discuss identity versus the real person, and I know that writing about it well requires more drafts and more rewriting than the quick job that I'm giving it here.

So what has all this to do with "My Back Pages?" This slow-moving, densely worded song is a statement of intent, one that shuts down the old machine shop of protest songs and socially conscious songs and songs written for the people. It looks forward to new kinds of songs, the ones that took a more aggressive stance toward rejecting what he had become known as. Songs like "Maggie's Farm," for example. And change he did. Folksinger to rock singer to country singer to middle-of-the-road country crooner, all to pursue that art that he wanted to pursue, while losing in his rearview mirror the people whose criticism of his new music must have aggravated him... though I am sure that any criticsm of anybody's work hurts the laborer who produced it. I don't know how it couldn't.

In this song, Dylan presents a series of scenes that describe his old self. Some of them are abstract, some less so. I've read various descriptions of these words as being like those of William Blake, though with the songs of experience coming first, then the songs of innocence. The recurring line "I was so much older then, I'm younger than that now" refers to the idea that shedding the old, weighty concerns of his previous songs allows for new, different and deeper songs to spring up. Or so I think, at least.

Crimson flames tied through my ears
Rollin’ high and mighty traps
Pounced with fire on flaming roads
Using ideas as my maps
“We’ll meet on edges, soon,” said I
Proud ’neath heated brow
Ah, but I was so much older then
I’m younger than that now

Half-wracked prejudice leaped forth
“Rip down all hate,” I screamed
Lies that life is black and white
Spoke from my skull. I dreamed
Romantic facts of musketeers
Foundationed deep, somehow
Ah, but I was so much older then
I’m younger than that now

Girls’ faces formed the forward path
From phony jealousy
To memorizing politics
Of ancient history
Flung down by corpse evangelists
Unthought of, though, somehow
Ah, but I was so much older then
I’m younger than that now

A self-ordained professor’s tongue
Too serious to fool
Spouted out that liberty
Is just equality in school
“Equality,” I spoke the word
As if a wedding vow
Ah, but I was so much older then
I’m younger than that now

In a soldier’s stance, I aimed my hand
At the mongrel dogs who teach
Fearing not that I’d become my enemy
In the instant that I preach
My pathway led by confusion boats
Mutiny from stern to bow
Ah, but I was so much older then
I’m younger than that now

Yes, my guard stood hard when abstract threats
Too noble to neglect
Deceived me into thinking
I had something to protect
Good and bad, I define these terms
Quite clear, no doubt, somehow
Ah, but I was so much older then
I’m younger than that now 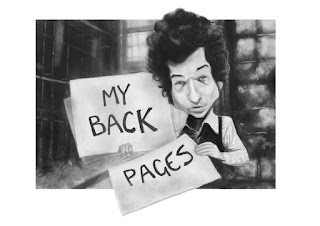 Posted by Robert MacMillan at 12:28 PM

Labels: 1964, Another Side of Bob Dylan, My Back Pages