Mama, You Been on My Mind

Is it the weather?
Or is it that I miss you?
Whatever it is...

Some haiku gain more from leaving out the central concept when it's so clear in the title that you don't even need to express it again. Such is the case of "Mama, You Been on My Mind." Bob Dylan recorded this song in 1964 for the album "Another Side of Bob Dylan," though it didn't make the final cut. Instead, it appeared on the first volume of the bootleg series in 1964. Plenty of other people covered it in the meantime, including Judy Collins, Ricky Nelson, Johnny Cash, Dion and the Belmonts, Linda Ronstadt and Rod Steward. It's generally understood that he wrote it for his ex-girlfriend Suze Rotolo.

What might it be that has you on his mind?
- Maybe the color of the sun
- Maybe the weather

Where I'm coming from:
- I don't mean trouble
- I'm not asking for you back
- I'm not saying I can't forget
- I'm not contorting myself in sadness

Well, maybe one condition:
- Look at yourself in the mirror tomorrow morning. I wonder if you can see yourself as clearly as I see you. 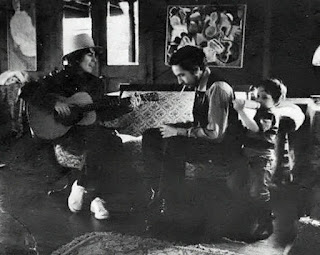 Posted by Robert MacMillan at 4:29 PM