Summer holidays
In Mozambique sound like fun.
Watch out for landmines.

"Mozambique" is one of the stranger songs in Bob Dylan's canon. It appeared on the 1976 album "Desire," and was, like most of the songs on the album, written with psychoanalyst, English professor and "Oh! Calcutta!" musical director Jacques Levy. It's a short song about a romantic getaway to the sunny beaches and tropical paradise of Mozambique. At that time, the southeastern African nation and former Portuguese colony was just getting over a 10-year insurgency against its former colonizer, and was busy being mined to the gills. It was, perhaps, an imaginary Mozambique in another universe. 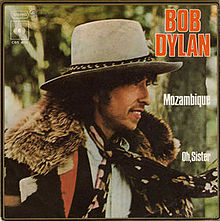 Posted by Robert MacMillan at 11:51 AM